No, these honeybees do not have mad cow disease….they are doing what is known as a waggle dance.

Bees use the waggle dance to communicate the location of food or lodging to her colony mates. As they circle you will see them waggle in a specific direction. The top of the circle, or 12 o’clock, is the location of the sun. So if they are waggling to the left of 12 o’clock the direction they are communicating is to the left of the sun. If they are waggling say at 2 o’clock then she is telling her nest mates that there is food at about a 45 degree angle to the right of the current position of the sun.  The length and veracity of the dance communicate the quality of the food source as well as the distance to the food.

Waggle dances are also used to communicate the new location of a nesting site when a colony swarms. If you took the time, and had the inclination to snuggle up to a swarm you would be able to watch as several bees fly back to the swarm and begin doing different waggle dances as they try to win over their sisters as to which location is best suited for the swarm. They have already made a recon flight, found what seems to be a good location based on factors like, entrance size and size of the cavity, made their way back to the swarm and begun telegraphing this information to the others in the swarm through the dance. You would also be able to watch other bees take note of the dance and fly out to look at the proposed location for themselves. As time goes by more and more of the bees become convinced that one of the locations is better than the rest, at which point the swarm moves as a whole, protecting the queen as they move to their new digs. 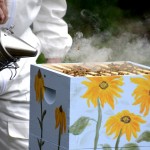 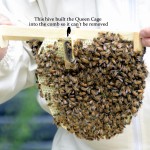