We are in the middle of winter and have been in a cold spell. Dry days and clear nights have lead to temperatures in the teens and 20’s. I’ve used a flash light to look in the windows of the two warre hives to check on the bees. Green roof hive is looking good but I’m afraid flowers hive might be dead. I can see the bees all clustered together but no movement at all. Also seeing quite a bit of furry mold on the comb. The nuc is still a mystery as I don’t want to open it up to check….I hate this part of beekeeping.

At our bee club meeting last night we had the discussion about overwintering our bees. One lady suggested that perhaps it would be a good idea to move the hives into a warmer, protected area like a carport or shed. While this sounds good it was pointed out that what is really better for the bees in general is to let the stronger ones survive the winter then try to graft some queens from this stock. In this way we are promoting bees that are stronger and that can deal with winter in the Northwest.

Three things affect our bees in this area

If each of these are kept in check the bees should make it.

My goals for this year:

Have at least 2 of my 3 hives survive.

If my nuc survives move it into an 8 frame western

Graft a queen from my healthiest hive

I do have quite a bit of work to do on equipment. I need to build the nuc boxes I bought from Brushy Mountain when they had their sale and I also need to build a lot of frames so that I’m ready to stock the western, and I hope to build a jig that will help me to glue and nail straight frames……Can’t wait for the next day that is in the 40’s so I can take a closer look at the hives….Til then all I can do is worry. 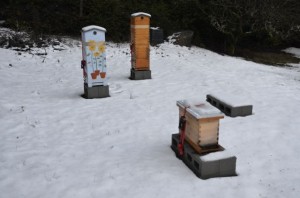 It is December in Seabeck Washington. While our winters are very moderate compared to much of the country we do get snow from time to time. We just had two days of snow and our neck of the woods had over 10 inches. The days now are upper 30s and might get into the mid 40s this next week, the nights are in the lower 30s….in any case the snow will not last long.

A friend asked me today about the bees. What do they do when it snows? Do they hibernate?

This is the 6 million dollar discussion. How do you get the bees through the winter. This is the crux of what so many beekeepers struggle with each year. It is not unusual to have a 30 to 50% loss each year.

The bees do not hibernate. I consider hibernation like a sleep state. Bees remain active throughout the winter. They generate heat with the same muscles they use to fly. They flex or pump their mucsels in such a way that they maintain a core temperature of about 89 to 97 degrees F.

During warm weather bees come and go from the hive. Collecting and returning with pollen, nectar  water or sap. They also leave for cleansing flights as they do not defecate in their hive.

At about 64 degrees F the bees begin to cluster, that is collect closely together to preserve heat. There are two basic parts of the cluster; the core which uses its muscles to create the heat and the outer layer that acts as insulation for the core. As temperatures drop the cluster tightens. The bees rotate from the inner part of the cluster to the outer, taking turns generating the heat. The energy they use is fueled by the honey they eat or the sugar the beekeeper has given them if they do not have sufficient honey stored.

The queen slows down egg laying and stops all together for a short time all to preserve energy and make it through the winter. Some think that the winter solstice is what keys the queen to begin to slowly build up the brood again.

Beekeepers in areas with harsher winters may actually wrap their hives to better insulate them, making it easier on the bees. The typical advice when it snows is to leave the snow on the top of the hives, it acts as an insulator.

My goal now is to just check them on warmer days and ensure they have plenty of sugar….and hope I don’t suffer the 30 to 50% loss that others have.

Thank you Lee for this great question.

Resource for information in this post came from here: http://www.capabees.com/main/files/pdf/winteringpdf.pdf

Many of you may have heard me commenting that though I love Brushy Mountain Bee equipment I don’t like the expense of having it shipped. Well now is the time to buy. Free shipping on Black Friday. I don’t get any benefit from passing this on, I just think it is important to tout good quality and I think their western nucs are the best on the market: 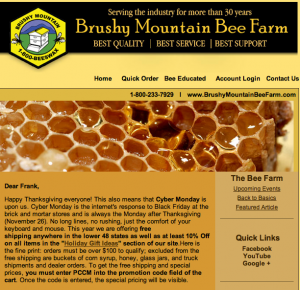 As I approach my first winter in beekeeping the biggest hurdle yet to overcome is keeping my bees alive throughout the winter. Even the most experienced beekeepers struggle with this. So I’ve set some milestones for myself and will go into this season on purpose…so that if I completely blow it I’ll at least know what not to do next year.

I checked my hives a few weeks ago and as usual…good news and bad news. The good news is that I seem to have a low mite count. In one hive I have 25 mites that dropped in a 24 hour period and on the other only 14. My target was less than 24 mites per 24 hour period….I think I’m good on this issue.

On stores…..not so much. Very little honey in the comb. 2 to 3 frames in one and less than that in the other. The nuc has maybe one full frame of honey.

My plan of action based on my hive inspection:

2) Feed sugar water through Oct then switch to sugar and pollen patties.

The reason you cannot feed sugar water all winter is because the ambiant moisture is so high the bees would not be able to store the sugar water in the comb and then get it down to below 18% humidity. Anything above 18% and it will spoil giving the bees dysentery.

Above is a video showing how I built the sugar boards. A nice 1 day project to improve the chances your bees will survive the winter. 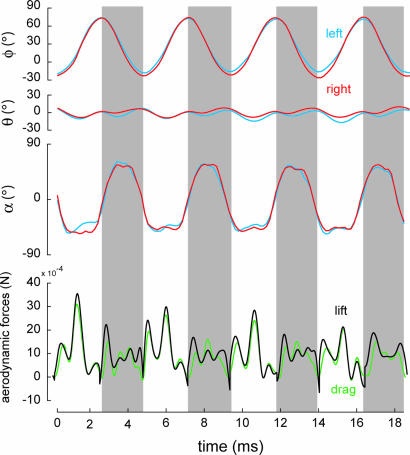 An indoor observation hive that was built by Darren from House of Bees. He built the warre hives that I’m using and is taking a particular interest in building hives into homes.

There is a little bit of a trick here because the bees on the inside can get quite a shock when they go to move outside, especially if it is cold. Darren provided a copper entry way so that bees coming out will sense the true outside temperature before taking the big plunge.

Much below 50 deg. F and bees are unable to fly and if it gets into the lower 40s their muscles are no longer able to shiver which is what allows them to generate heat. A single bee left alone in lower 40’s may not make it for long. This is why they cluster within the hive taking turns using their flight muscles to shiver which generates heat for the colony.

Thermo-regulation of a bee colony is one of many fascinating sub topics within the beekeeping world.

Link to House of Bees: http://www.houseofbees.com

By now you have  heard of the sever downturn in bee population in the United States and for that matter the world. If not check out this video. 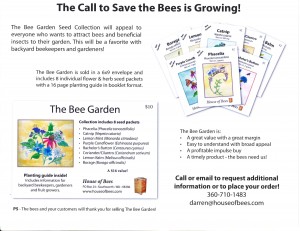 So what is an average person to do? With environmental and world problems we often ask ourselves “what can I do to help” or you come to the conclusion that this is too big of a problem for one person to help out with, and, after all I don’t know anything about bees and I certainly don’t want to have a box full of them in my yard….so what can I do?

Here is a solution for those that don’t want to get into beekeeping but yet want to have a nice yard or planter box…Plant some bee friendly flowers. Now it is a win-win. You get the benefit of enjoying beautiful plants and flowers and the bees have what they need to feed and support their colony so that they can continue to do the heavy lifting of pollinating our fruits, vegetables and flowers.

Here is a link to a source of seeds that bees love. The variety pack also has a fact book included that has information about the plants as well as bee facts.