We are in the middle of winter and have been in a cold spell. Dry days and clear nights have lead to temperatures in the teens and 20’s. I’ve used a flash light to look in the windows of the two warre hives to check on the bees. Green roof hive is looking good but I’m afraid flowers hive might be dead. I can see the bees all clustered together but no movement at all. Also seeing quite a bit of furry mold on the comb. The nuc is still a mystery as I don’t want to open it up to check….I hate this part of beekeeping.

At our bee club meeting last night we had the discussion about overwintering our bees. One lady suggested that perhaps it would be a good idea to move the hives into a warmer, protected area like a carport or shed. While this sounds good it was pointed out that what is really better for the bees in general is to let the stronger ones survive the winter then try to graft some queens from this stock. In this way we are promoting bees that are stronger and that can deal with winter in the Northwest.

Three things affect our bees in this area

If each of these are kept in check the bees should make it.

My goals for this year:

Have at least 2 of my 3 hives survive.

If my nuc survives move it into an 8 frame western

Graft a queen from my healthiest hive

I do have quite a bit of work to do on equipment. I need to build the nuc boxes I bought from Brushy Mountain when they had their sale and I also need to build a lot of frames so that I’m ready to stock the western, and I hope to build a jig that will help me to glue and nail straight frames……Can’t wait for the next day that is in the 40’s so I can take a closer look at the hives….Til then all I can do is worry.

Driving of the drones, the movie

Each year the drone bees are driven from the beehive in preparation of winter. Since the males serve no purpose to the hive other than mating services, as winter approaches they are quickly identified as consumers and are driven away to preserve the food set aside for winter.

Some specifics of a drone bee:

The drones are male

They are larger than the female

The drone typically has a dark or black abdomen

The drones have large eyes

The main function of a drone bee is to mate with a queen bee. Since mating happens “on the wing” the large eyes allow a better chance for the male to spot the queen in the air so that he might mate with her. This is his only function. The drone bee does nothing in the hive, no house keeping, rearing of the young or foraging. In fact the male does not even have a stinger. A honeybee hive is a female dominated society.

What you will see in the video:

Some of the bees will be carrying pollen in the pollen baskets on their rear legs.

The largest bees are the male or drone bees.

You will see the females chasing drones out of the hive or over the edge of the landing platform.

You will see females riding the drones, though they typically do not sting the drones they are known to damage the drones wings and inflict damage on them that will disable them.

It is not uncommon to see females drag undeveloped male larvae out of the nest as fall approaches.

The driven drone will usually only last a few days outside of the hive. The cooler temperatures, predatory birds and other insects will typically aid in the final chapter of a drones life. It is not until next spring that the queen will once again begin laying male eggs to begin the cycle anew.

Watch carefully as the large male bees are escorted, driven, herded and cajoled out of the hive by the females.

FINALLY…..it seemed a long wait for the bees to arrive. I started reading, studying and researching everything about bees since October or so and now I’m finally a “beekeeper”. I can tell you first hand, despite all the research and discussion, nothing prepares you for the first time you unleash 10,000 bees into an open hive. Even with the bee suite on I kept thinking…..what if they turn on me????

Well, of course they didn’t. They are every bit as gentle as you treat them. I did get stung twice but both were my fault. One girl stung me because she got trapped under the wrist band of my watch (lesson..don’t wear that again) and the second bit me because I was not looking at what I was grabbing. I turned to pick up the top of the hive, grabbed it without looking and got stung for my carlessness.

This video is the installation of the first package into a new Warre hive. These are Italians. I also purchased a package of Carniolans which I installed the next day. I’ll post that video in the next week or so.

They have both settled nicely into their new homes and are drinking lots of sugar water as it is still pretty rainy.

Please feel free to comment below and link back if you have a website about bees that you have found interesting.

We spent the weekend getting our two warre hives ready. Bees will be here in 3 weeks or so. I’ve seen quite a bit written about painting your bee hives so to save you the time here is what I’ve reduced it down to:

Color: color does not really matter though keep in mind that light colors reflect the heat away from the hives and dark colors attract the heat. For me, where I live the darker the better as beeks in our area seem most concerned with keeping their bees alive throughout the winter. If you only have a couple of hives you can afford to get decretive. In our case my wife is painting one and I’m doing the other. She is planning a colorful design while mine will look like a log house, green roof and golden brown sides. If you had 20 hives to paint I’d recommend a spray gun or roller to cover as much territory as quickly as possible….maybe that is one of the benefits of being a backyard beekeeper, small scale.

Type of paint: Latex, water based exterior paint. Low VOC would probably be the best but if you used regular VOC paint and let them sit for a few weeks I’m sure there would be no problem. Stay away from oil based paints. In our beekeepers class they really pushed for you to use leftover paints that you or a neighbor might have left over from your last project.

What to paint: Just paint the outside. Do not paint anything the bees will be living on. Your goal is to protect the wood from the elements while realizing that over a few years your hives will age. All of the bars, frames, inside walls, ceiling and floor should be untreated wood.

My warres are 16” x 16” so I’m putting down a 16 x 16 inch square paver that I’ll level with sand underneath and then on top of the paver I’m placing two 16 x 8 in cinder blocks side by side with the holes on the side. This way if it is getting stormy I’ll be able to run a nylon strap around the stack and through the cinder blocks to add stability.

I’ll post pictures of the paint job as well as how I have them placed in the yard next week.

Time never goes so slow as when you are waiting for your first package of bees….. 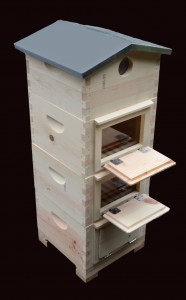 Today I nailed down my hive system by buying two Warre hives from Darren at House of Bees. Though Darren does not want to get into the business of shipping hives, if you live in the Pacific Northwest and want to pick up your hive he would be happy to sell you one. He also has a booth at many of the NW bee conferences. As I mentioned in the last post I looked at several places to buy hives. Fortunately I met Darren at my first West Sound Beekeepers Association meeting. He sells a very high quality Warre hive system with many upgrades including; observation window, feeding solution built into the quilt box, screened bottom board, and beveled topbars with built in spacers….. all wrapped up in fine workmanship. I know this sounds like a commercial for House of Bees (ok so it is) I really believe in supporting local service providers and when you find one that is knowledgeable, provides a good product and is excited about what they do you should share it with the world.

Next step is to paint the hives and find where I’m going to keep them in the yard. I thought I had two good places picked out but with Darren’s coaching I’m looking elsewhere.

So….for now, since I’m long on hives and short on bees I’m not quite yet a “beekeeper” rather a “hivekeeper” 🙂 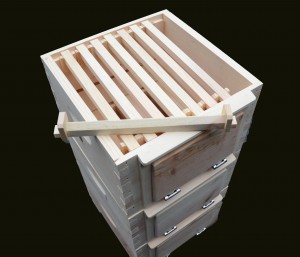 The amount of information available about; bees, hive systems, honey, pest and disease control is amazing. Thanks to technology, discussions can be had with beeks all over the world. I’ve read several books, started reading an array of magazines, reviewed many blogs and bee websites and read posts on a couple of forums. The fun thing about a new hobby like this is you learn about stuff that you did not even know existed…..like, did you know there is a huge black market in honey? Honey laundering…..wow, but that is another complete topic.

The two forums that I’ve joined are both in Yahoo Groups; warrebeekeeping and westsoundbees

The warrebeekeeping group is comprised of beekeepers from all over the world. It is a great learning advantage just to read the various posts. Many of the topics are over my head but a lot of it deals with everyday hive management.

Based the the reading that I’ve done and my basic philosophy of letting nature take its own course has me leaning toward starting out with two Warre hives. I’ve looked at two websites seriously; http://www.beethinking.com and http://www.thewarrestore.com. Both seem to have quality built warre hives. I was leaning toward beethinking as they are located in Portland until I came across a local who is building warre hives. I hope to visit with him in the next week or so and I’ll post the particulars.

My reasons for a Warre:

1) Seems to be more natural for the bees, better resembles the inside of a tree

2) Requires less handeling by the beekeeper

4) Seems that there is a lower incidence of mites

5) Less complicated (simpler can be better)