A couple of weeks ago I noticed that the Italian queen in one of our hives, that we call flowers hive, was not very agressive in producing brood or encouraging her troops to build out comb. So we made the decision to replace her. I contacted Pendall Apiary and ordered a new queen. 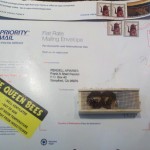 Queen Bee in the mail.

When she arrived I took the queen from flowers hive and moved her into a nuc box that I ordered from Brushy Mountain. I like this model because it has 1) screen bottom board 2) telescoping cover 3) inner cover with notch to provide a top entrance 4) western size.

I took two frames from the flowers hive and brushed another frame of bees into the nuc. I then took the new queen and placed her into the flowers hive with a marshmellow in the queen cage. I popped a boardman feeder on the nuc and hey…..we are off to the races. I’m feeling all warm inside that I’ve just overcome my first apiary challange….I’m the king of the world….wouldn’t you think????

I noticed a lot of activity around the nuc hive. Wow, I thought, these bees are doing great! As time went by and I actually spent some time 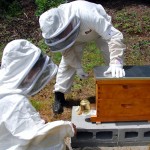 Boardman Feeder..dinner bell to the masses

watching the entrance to the nuc, I saw far more activity than I would expect from this little colony…soon a different story began to emerge. I noticed what I would call “guarding” agressive behavior at the entrance. Each bee was frisked down by a sentry bee and in many cases I saw the guardian chase off another bee. I saw more bees coming and going than was appropriate for this small nest. I really got the picture when I saw two bees fight to the death. I knew that I had to open this box up and see what was happening.

The next weekend I pulled the nuc appart and what I saw was very telling of my mistakes. I saw fewer bees than I put in, I saw zero comb fill. Nothing in two hanging frames of comb…no honey, no brood, no pollen. I also saw lots of dead bees on the bottom screen. These poor bees were literally being robbed to death.

2) Set up a winter type feeder, mason jar full of 2 to 1 sugar water feeding through the inner cover hole with another box around that with the telescoping cover on top

3) Blocked down the main entrance to zero, opened a top entrance on the back of the hive. Small and easy to defend. (I love this feature on Brushy Mountain inner covers, a notch that can be opened or closed to form an upper entrance.)

4) Brought over more frames of brood and honey and brushed in another two frames of bees.

My mistakes were killing my bees and I felt bad about it. My mistakes:

A – I did not give my nuc enough resources to make it. I learned later in an advanced beekeeping class that our club, West Sound Beekeepers Association puts on that when making up a split or nuc you should provide; 3 frames of brood and 2 frames of honey and pollen plus brush in 2 to 3 more frames of bees.

B – Never use a boardman feeder. Other bees see it as an easy source of nectar and quickly move from that into the hives resources, before you know it you have a cavern instead of a beehive.

C – Block down the entrance of a nuc or new hive. They need to be able to easily defend themselves as they get built back up otherwise stronger hives around them might take advantage of the situation.

D- Even though I may have gotten away with it this time, I need to make a hive go queen less for 24 to 48 hours before introducing a new queen.

Last weekend I made an inspection of the nuc. I’m happy to report things have turned around. 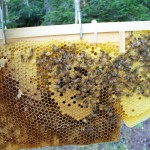 Bees have filled in the space around the warre topbar

I see new comb being built, honey being stored, brood in all stages and a calm group of bees. Will this be enough to make it over the winter???? Who is to say, but they are sure better off now that I’ve fixed my original mistakes.

They say bess die because of; weather, pests, poison, starvation and bad beekeepers. Hopefully it is early enough in the season for these bees to recover from my rookie mistakes.