Driving of the drones, the movie

Each year the drone bees are driven from the beehive in preparation of winter. Since the males serve no purpose to the hive other than mating services, as winter approaches they are quickly identified as consumers and are driven away to preserve the food set aside for winter.

Some specifics of a drone bee:

The drones are male

They are larger than the female

The drone typically has a dark or black abdomen

The drones have large eyes

The main function of a drone bee is to mate with a queen bee. Since mating happens “on the wing” the large eyes allow a better chance for the male to spot the queen in the air so that he might mate with her. This is his only function. The drone bee does nothing in the hive, no house keeping, rearing of the young or foraging. In fact the male does not even have a stinger. A honeybee hive is a female dominated society.

What you will see in the video:

Some of the bees will be carrying pollen in the pollen baskets on their rear legs.

The largest bees are the male or drone bees.

You will see the females chasing drones out of the hive or over the edge of the landing platform.

You will see females riding the drones, though they typically do not sting the drones they are known to damage the drones wings and inflict damage on them that will disable them.

It is not uncommon to see females drag undeveloped male larvae out of the nest as fall approaches.

The driven drone will usually only last a few days outside of the hive. The cooler temperatures, predatory birds and other insects will typically aid in the final chapter of a drones life. It is not until next spring that the queen will once again begin laying male eggs to begin the cycle anew.

Watch carefully as the large male bees are escorted, driven, herded and cajoled out of the hive by the females.

When talking with children about sex, why do we often refer to it as “The Birds and the Bees”? I can tell you that from what I’ve been learning about how bees reproduce …… it has nothing to do with human sexuality.

Most of the bees in a hive are female. What makes one female a queen when the rest are worker bees is what they are fed (another fascinating story).  Once the pupae emerges from its comb as a queen it first goes in search of other queens in the hive. If there are several queens being reared by the colony the one that emerges first and is the strongest will kill off the others and after spending 5 to 10 days getting her bearings she goes in search of mates. 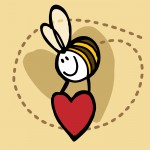 The virgin queen fly’s from the hive some distance and into a zone, often refereed to as a mating yard, where males hang out hoping to meet up with a female. Nature has already figured out the correct distance from the hive she must fly so that she has a higher chance of mating with drones that are not from her hive or surrounding hives, thus diversifying her hives genetics.

Over the course of several flights she will mate with, on average, 12 males, or drone bees. The queen collects and stores sperm in her spermatheca. Once her spermatheca is full she will return to the hive never to mate again. The now mated queen begins laying eggs. From here on out she will lay between 1500 and 3000 eggs per day.

Though that my sound like a lot of eggs please keep in mind that a strong colony, in the summer when necter is flowing, will contain between 60,000 and 80,000 bees. The average worker bee during the busy season will only live for 6 to 8 weeks before working herself to death.

When the queen lays an egg she chooses, depending on the needs of her colony, to either fertilize the egg, which produces a female or to not fertilize the egg which will result in a male. A typical hive will have between 10% and 15%  drones in its population.

A hives health, cleanliness and attitude all come from the queen bee. She emits pheromones that drive the needs and personality of the colony. Queens can live up to 5 years but typically beekeepers will replace the queen after a season or two to ensure the health and vibrancy of the colony.

So, next time you hear someone say, we need to have the talk…you know, the one about the birds and the bees…..well, at least you will know better.

Sources for this information: