An excellent report by Dan Rather. More questions than answers but this story at least heightens the awareness of the impending doom of the honey bee unless we can get a handle on the use of chemicals and pesticides on our crops. 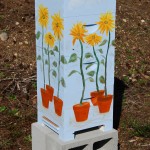 In case this video does not load click here.